A key property protected by the Galiano Conservancy Association is District Lot 63, a 152-acre section of the mid island that adjoins to mature forest in crown land, together making up the Pebble Beach Marine Reserve. 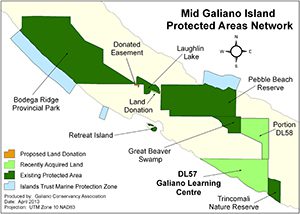 District Lot 63 (included in the Pebble Beach Reserve on the map) is an integral part of the Mid Galiano Protected Areas Network.

The current state of the land is the direct result of past timber production management objectives. The site is predominantly two plantation forests, one planted in 1967 and one in 1980. These plantations are the focus of a unique forest restoration effort begun in 2001 by the Galiano Conservancy Association. We are nurturing stand growth favoring species diversity and structural complexity, and promoting ecological integrity.

Restoration treatments at Pebble Beach include:

We have worked to create higher complexity and diversity in the stands by creating gaps and installing woody debris. This has involved selective girdling, topping and pulling over of some of the Douglas-fir seedlings in the plantation, as well as erecting snags and re-distributing the debris from windrows that were left behind from logging activity. Our mandate encourages carrying out the restoration work with as minimal impact as possible. We are treating the stand using muscle power and mechanical advantage, eliminating the need for power tools and internal combustion engines. An initial 4.5-hectare treatment area is almost complete.

See vol. 8, 2004 of the Conservancy’s Archipelago magazine, for a detailed article on this project. For a Scientific paper on the project including a technical section on operations design see “Restoring the forest in a Young Coastal Douglas-fir Plantation”, (Scholz et al., 2004.)

To get some of the feeling of what it is we are doing in District lot 63 check out “Let It Rot” a 6:36 min film made by the Galiano Conservancy Association and the Gulf Islands Film and Television School.

There is also another film, “skyline” by Brie Wittman & Laura Blackadar highlighting the novel restoration project the Galiano Conservancy carried out at the Pebble Beach Marine Reserve.