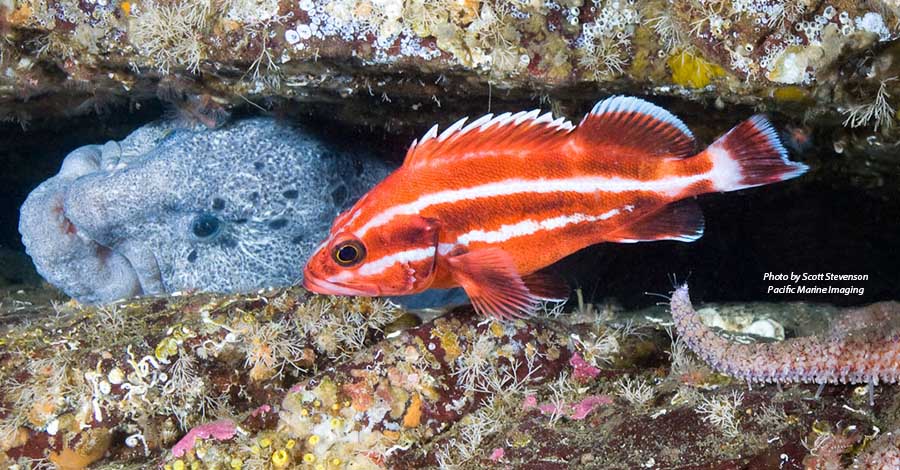 Respect Your Elders: Plunging into the Rockfish Project

Rockfish (Sebastes), are a fascinating genus of fish with many unique characteristics that make them quite distinct from others. Their Latin name Sebastes translates to “magnificent” in Greek. How fitting for these special creatures.

Rockfish populations are declining due to a number of external threats. Several rockfish species are now listed as threatened or “of special concern” by the Committee on the Status of Endangered Wildlife in Canada (COSEWIC). Throughout British Columbia, the management of rockfish is split up into outer shore and inner shore areas due to the fact that rockfish located inshore are experiencing more severe declines. Protection of rockfish through Rockfish Conservation Areas (RCA’s) that restrict fishing activities, and community-based education, are essential to combat the human impacts that threaten rockfish in today’s world. Some of the prominent threats that rockfish face are:

In British Columbia – land of the famous salmon – it’s tough for other fish to make a splash. But around the Southern Gulf Islands, another fish is making waves through the hard work of local scientists and conservation groups. The Rockfish Conservation Project started through a partnership between the Galiano Conservancy Association, the Valdes Island Conservancy, and the University of Victoria School of Environmental Studies, to raise the profile of BC’s imperiled rockfish. It’s an effort that started out small in 2011 when a decline in rockfish was observed around the Southern Gulf Islands causing the Galiano Conservancy to jump into action. We coordinated a SCUBA survey in 2011 to assess rockfish numbers inside and outside some of Galiano’s Rockfish Conservation Areas. GCA biologist at that time, Lia Chalifour, led this effort and results of this survey found more rockfish outside of the Conservation Areas than inside. This preliminary finding created a host of new questions and avenues to explore. The project grew from 2014 through 2019 thanks to support from Environment and Climate Change Canada’s Habitat Stewardship Program.

Darienne’s research showed low knowledge of rockfish and Rockfish Conservation Areas, and moderately high levels of illegal fishing within those areas. It is likely that this illegal fishing is due to the low knowledge among fishers. Results from Darienne’s research spawned an outreach campaign by the Galiano Conservancy, who pulled together more community partners like the Vancouver Aquarium and the Marine Life Sanctuary Society along with local researchers. Working together, they installed 29 permanent signs on eight Southern Gulf Islands and they plan 19 more for the Vancouver Island and Mainland BC coasts. These groups continue to spread posters across the region to raise awareness of Rockfish Conservation Areas and threats to rockfish.

In the summers of 2015 and 2016, Galiano Conservancy Association intern Alanna Vachon continued Darienne’s trail camera monitoring and dockside surveys to see if fisher behaviour or knowledge changed after the education campaign. Alanna found that 88% of people interviewed thought rockfish conservation was important, with 52% suggesting increased education to improve knowledge. This shows that outreach is improving public awareness, and that the community wants to be more informed.

Next it was time to plunge under the waves with some intensive SCUBA dive surveys to collect data on rockfish abundance and diversity. In 2015, Masters student Lily Burke, also from University of Victoria Environmental Studies Program, took up the rockfish conservation role. She did surveys of rockfish abundance inside and outside Conservation Areas by diving 58 sites throughout the Southern Gulf Islands —not for the faint of heart!

This project also compared rockfish abundance to known levels of recreational fishing, from research conducted by Dr. Dana Haggarty and Darienne Lancaster. Valdes Island Conservancy has been documenting habitat within and outside of the Rockfish Conservation Areas with a 100m drop camera (filling the gap of where divers can’t see). Their findings indicate that very little of the Conservation Areas are actually suitable rockfish habitat, which is being further explored.

As of 2017, 45 permanent RCA signs were posted at water access locations around the Southern Gulf Islands. This is also the year when our social media work took off by creating a Rockfish Conservation Project page on Facebook. Here current articles, rockfish facts, and conservation events were posted to keep people up to date, while also trying to reach a larger number of the public. Each year we have continued to spread outreach materials at community events, and conducted more interviews with fishers to see if compliance with fishing regulations in RCA’s has increased along with the conservation of rockfish as a whole.

A solution to combat barotrauma is through descender devices – weighted devices that allow rockfish to be brought back to the depth they were caught at ensuring time for their swim bladder to compress back to its original size. These devices increase the rate of survival after catch and release incidents.

Starting April 2019, descender devices are now mandatory for fishers to have. It is recommended to use these under two minutes of capture for most effective survival rates.

There are three types of descender devices:

2. Pressure-release clamp: Attaches to the jaw and automatically releases when a depth setting on the device is reached.

3. Barbless inverted weighted hook: Attaches to the jaw and when the correct depth is reached and the line is tugged, a recovered rockfish will swim away.

Fast forward to 2019 and community-based education has really taken flight! From 2016-2019 the Galiano Conservancy has attended public outreach events that occurred throughout the Southern Gulf Islands, the Greater Vancouver area, and the Greater Victoria area in the summer months of May-August. Our education efforts have not gone unnoticed throughout the recent years; 90 people were reached starting in 2015, and in 2019 we had reached over 920.

Recreational fisher interviews are still being conducted during high fishing season (June-August). Their results have shown a positive shift in awareness as only 32% of fisherman were confident in RCA boundaries in 2015 compared to the 60% in 2019. Along with this, 88-93% of fishers now agree that there is a need for rockfish conservation. Knowledge of permitted activities within RCAs is also increasing. In 2015, 68% of fishers were under the impression that a minimum of one prohibited fishing activity was allowed within RCAs. However, as of 2019 this statistic has decreased to 37%.

Alongside public outreach, shore-mounted trail cameras facing RCAs have also continued to collect data to monitor the effectiveness of our outreach, along with the compliance of RCA rules. After multiple years of data collection in this area, we have found that the overall percentage of fishing within RCAs has largely decreased, from 15.6% of days monitored with suspected fishing in 2016, to 2.8% in 2019. Our data analysis shows that during this study, knowledge about RCAs and compliance is increasing, however, it still needs improvement. Although mostly positive, these findings demonstrate that the need for community-based education is still essential in order to create more public awareness for RCAs and the conservation of rockfish.

Please check out our Rockfish Conservation Project Infographic which provides a visual aid for details of the project!

Thanks to new support into 2023 from the BC Salmon Restoration and Innovation Fund (BCSRIF), the Rockfish Conservation Project will be continuing and expanding further over the next few years with the University of Victoria taking over as new lead of the project, with additional partners being the Angler’s Atlas, Ball State University (BCU), and Fisheries and Oceans Canada (DFO). The Galiano Conservancy remains a major partner in the project, and will be continuing our monitoring of RCA compliance through trail cameras and surveys, and our outreach efforts to educate recreational fishers each summer.

Moving forward, the Rockfish Conservation Project is building on the substantial knowledge gained through previous research and is planning to extend these marine conservation efforts. There is continued information gathering (e.g. fisher interviews, and camera monitoring of RCA’s) and sharing (i.e., public talks, posters, youtube video) activities planned for the future.

Education is key! While the Rockfish project is seeing a rise in awareness, a continuous effort in fighting for the conservation of Rockfish populations is needed. If you would like to read further about this project, check out the article done by Hakai Magazine. Please note the article forgot to mention the Valdes Island conservancy as one of the original partners in this project from 2014 to 2019. Thank you to all who have supported this work!

What can YOU do to help rockfish conservation?

-Know the location of your local Rockfish Conservation Areas (RCAs)

-Abide by the restrictions in these areas while fishing

-Be a conscious consumer of seafood (Rockfish is often sold as Red Snapper!)

-Report the size, abundance, and species of rockfish during your next fishing trip via the MyCatch app, after you have descended them down with your descending device

-Support organizations that are working on rockfish conservation

The Rockfish Conservation Project also has a Facebook Page! Here you can find relevant articles, news, and conservation events that are happening!

For more information on Rockfish Conservation you can visit  habitat stewardship program, and rockfish. Bonus: you get to dive in the ocean and see the amazing ecosystem right off our Galiano shore through one of our diving videos!