Along the eastern shores of Galiano Island lies a stretch of sandstone beach connected to 1,250 protected acres (500 hectares) of rare coastal Douglas-fir habitats. This is Cable Bay, a favorite spot for islanders and visitors alike, and one of the most important biodiversity hotspots on Galiano’s Georgia Strait coastline. The Nature Trust of British Columbia and the Galiano Conservancy Association have worked together to acquire 65.5 acres (26.5 hectares) at Cable Bay to extend the protected areas that span the island. The Cable Bay property, zoned for a residential subdivision, has been successfully purchased for conservation.

Cable Bay is part of an intact watershed on the mid-coast of Galiano, with a creek that emerges from the Great Beaver Swamp, a large wetland within the neighbouring protected area. Saving the Cable Bay property allows for the protection of the entire watershed, including the stream and riparian areas that are rich in biodiversity but also highly vulnerable to the impacts of climate change and development. The beach at Cable Bay has long been a coveted spot for island families and visitors to enjoy the waters of the Salish Sea.

Part of the traditional and unceded territories of the Penelakut, Hwlitsum, and other Hulquminum-speaking peoples, the bay has a long history as an important site to rest, gather provisions, and wait for good weather for Coast Salish travelling across the Strait of Georgia. Canoes could be portaged to the bay from Trincomali Channel, across the narrowest part of Galiano Island.

In recent times, the Cable Bay lands had been owned by one family for over 60 years and have been relatively undisturbed for nearly a century. The property features a mix of Douglas-fir, arbutus, maple and cedar trees with an extensive understory of salal, mossy outcrops and oceanspray. It has seasonal creeks and springs that weave through cedar forest, leading to a sandstone shoreline and abundant marine life. A number of old-growth trees remain along the forest edges and there is a grove of Pacific yew trees.

Cable Bay and its adjacent network are an important remnant of the Coastal Douglas-fir biogeoclimatic zone. As home to the highest number of species and ecosystems at risk in B.C., many of which are ranked globally as imperiled or critically imperiled, this zone is of great conservation concern. Only 11% of the zone is under protected area status.

Cable Bay is a haven for resident and migratory birds, intertidal life, fish and marine mammals. The nutrient-rich waters serve as excellent nurseries for young fish and are an ideal environment for overwintering birds, including buffleheads, harlequins, and multiple species of loons, grebes, goldeneyes, mergansers, scoters, geese, ducks, and gulls.

Partnerships have been critical to saving endangered habitat on Galiano Island. Generous donors both on island and beyond, along with government and conservancy partners, have helped to create an important protected corridor of over 1250 acres that spans the width of the island, from Trincomali Channel to Georgia Strait. Acquiring the Cable Bay property allows us to extend the biodiversity network that links Crown land, provincial park, and conservation lands. The property is now protected in perpetuity as a conservation area thanks to the joint efforts of the Nature Trust of BC and the Galiano Conservancy.

In August 2021, we publicly launched the Cable Bay conservation campaign in partnership with the Nature Trust of British Columbia (NTBC), one of the province’s leading land conservation charities, to save a 65.5-acre (26.5-hectare) parcel of rare coastal Douglas-fir habitat and over a kilometre of undeveloped rocky shoreline adjoining the existing Pebble Beach Nature Reserve.

Thanks to an outpouring of support from our members and other visionary donors, the parcel was successfully purchased at the end of 2021, and is now conserved in perpetuity!

This important land acquisition was made possible by the Government of Canada through the Natural Heritage Conservation Program, part of Canada’s Nature Fund, and by the Sitka Foundation, MapleCross, the Collings Stevens Family Foundation, Bob & Denise Campbell, Gwen & Hart Will, Dan Moore & Julie Gardner, and more than 150 additional donors, including many other Galiano Island residents, who all generously donated to ensure Cable Bay is protected for generations to come.

Thank you to everyone who shared our vision of preserving this special area for future generations – we could not have done it without you! 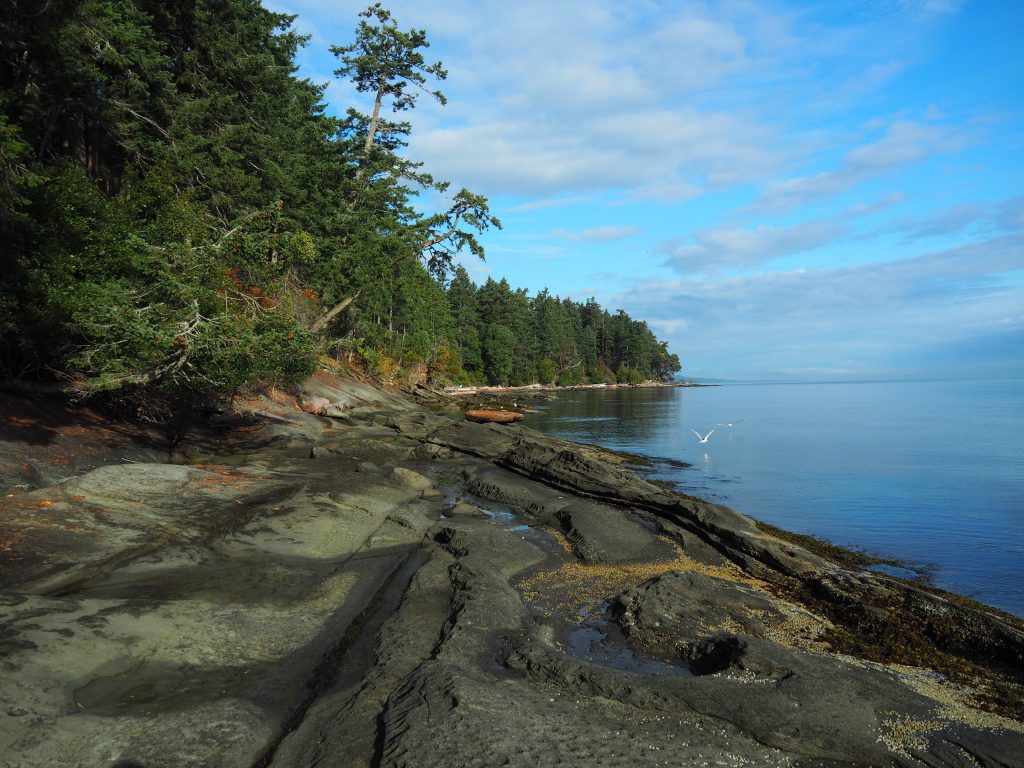